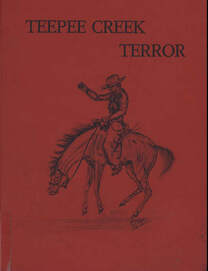 ​Please contact any of the following committee members if you have any old memorabilia, programs, ticket stubs, posters, photos etc. that we could scan (or take off your hands if you no longer want it) or let us know if you have a story to share.

History Committee Coordinator
Orval Sorken
Email: orvalsorken@hotmail.com
780-876-5899
​
We are very fortunate to have the Teepee Creek Terror book that was published in the 1970's by Jean Rycroft. This book captures the history of the Teepee Creek Stampede through stories, pictures, and memorabilia.  Read ONLINE today!

2009 - tore down old announcer's stand and replaced it with a larger and higher announcer's booth, introduced Canada to a brand new event called the TP Toro Totter, 4 Nights of WCA & All Pro Chuckwagon action

2008 - did a complete overall on our race track and rebuilt it – making it wider, banked the corners, installed a new shiny red steel inside rail, and replaced old fences with new chain link, did a major upgrade to our bucking chutes and built a 50 x 70 coverall building that for beer gardens and nightly rodeo dances

2007 - first year as a CPRA PRO Rodeo, complete modernization of the south end of the grandstands building a new beer gardens area as well as a new Chuckwagon Racing Announcers Stand

1943 - Rusty Hollingworth added the Musical Ride to the Stampede. A second Chute and A new corral was built

One of the signature events of the Teepee Creek Stampede is the TEEPEE CREEK TERROR. This is a bonus Saddle Bronc event that has a lot of history with the Stampede. The First Teepee Creek Terror took place in 1954 and to this day it is still held as a part of the Stampede. The Terror was always the rankest horse in the pen and the rider was required to stay mounted for a full 10 seconds for it to be a qualified ride (a standard ride is 8 seconds). The "lucky" rider for the Teepee Creek Terror is drawn at random from all registered riders for that day and is awarded $250 for getting on and an additional $500 if they can complete the ride. There have been many riders jump on the back of the Terror over the years and many of them went on to ride in the Pro circuit. Today, we invite our Pro competitors to try their hand to the Teepee Creek Terror!

The Stampede originally started out as a sports day and community picnic where local resident got together once a year for ball games, horse races, bronc riding, water sports and even boxing matches!!!! The first Teepee Creek Stampede was help in 1917 and it has continued to evolve into the event we present you today. The first Teepee Creek Stampede included a horse race across a full 1/4 section – it cost $0.50 to enter and the winner took home $5.

Rough Stock events became an integral part of the Stampede in the 1930's and Chuckwagon Races were added starting in the 1940's. Teepee Creek has a long history with Chuckwagons – the first wagons ran in 1946 and they continue to tear up the track in Teepee Creek to this day. Today we run the Western Chuckwagon Associations GMC Pro Tour of thoroughbred chucks and the All Pro Canadian Chuckwagon Association Taste the Dust Pro Tour pony chuckwagons. Every year our wagon performance gets a little larger and last year we had over 50 chuckwagon teams participate in the Stampede.

As a part of the Stampede, Teepee Creek actually boasts having once had its own musical ride. In the mid 1940's, A group of riders was assembled and a musical ride was orchestrated. In addition to putting on this show for the Stampede, this group traveled for miles and miles to perform their show at other venues across the north.

The Teepee Creek Stampede Dances need no introduction and have been a material part of the Stampede since day 1. Barn loft dances in Mackenzie's Barn are reminisced about by many and we carry on that tradition today with our nightly dances in the Enframe Barn.

Pari-mutuel horse racing also has a long history in Teepee Creek – the "Flat Races" at Teepee Creek are well remembered by many. While we do not host any flat races in Teepee Creek today, they are a very important part of our history.

Through the 80's and 90's the Stampede continued on through hard work from many volunteers but as amateur rodeo became less popular both with contestants and spectators, the show and the size of the crowd began to suffer.

In 2007, the board of the Teepee Creek Stampede Association made the decision to move to a CPRA Pro Rodeo event. It was a difficult decision at the time but one that we have not looked back on. Today we bring some of the best cowboys and cowgirls in the world to compete in front of Teepee Creek Stampede crowds – all while maintaining much of our history and some key local events such as the Wild Cow Milking, Wild Horse Race, and The Rawhide Race.

Everything about the Teepee Creek Stampede has been growing exponentially over the last 10 years. Since moving to a pro show, we have completed massive amounts of work to our grounds and expanded our wagon show from 2 nights of chuckwagon racing to now including 4 full nights of racing with a final dash for cash. In 2005, less than 1000 people passed through the gates during the Stampede. In 2015, we hosted more than 15K spectators!!!!